Fonterra CEO Miles Hurrell has come out and said that Fonterra supports the proposed emission pricing scheme He Waka Eke Noa (HWEN), in which dairy farmers will have to pay tens of thousands of dollars for emissions of methane which are already at net zero and not causing any warming.

With friends like Hurrell who needs enemies? With Dairy NZ and Fonterra against them, dairy farmers are in trouble.

Farmers are being let down here because Fonterra and Dairy NZ appear to be speaking for farmers but in fact, they are not genuine representatives.

Fonterra is a processor and marketer that might be owned by farmers, but it does not represent them as farmers, but as owners of a corporate entity which must be uncontroversial and very very PC and bland.

Dairy NZ is an industry good body that claims it advocates for farmers, but it does so at a level that is nonpolitical and thus unable to push the political discourse as much as farmers need.

While Fonterra remains useless in the space, Dairy NZ has moved to now include some reference to the science of methane in their advocacy and that is progress. However, the groundwork is still not being done sufficiently for farmers to be able to push the discussion to the point where we have got rid of the lie that livestock emissions are a major contributor to our emissions and until farmers are paying for them, the planet is in trouble and farmers are getting a free ride.

As I have said repeatedly, the official Government word and the independent Climate Commission both acknowledge that stable methane emissions are not causing further warming and the only reason methane emissions need to reduce is to offset CO2 emissions. Yet this message is not getting through to the wider public as much as it should.  I am sure the Fonterra CEO did not really want to shaft farmers in the way he has, but until the message is widespread enough for a brand conscious entity like Fonterra to acknowledge it, Hurrell and Fonterra are not going to be anything but a liability to farmers in this area.

That does not mean you can’t put a bit of pressure on to them and I would suggest you contact as many representatives in Fonterra as you can to express your displeasure at the CEO,

I would like to express my displeasure at the comments of the CEO Miles Hurrell. He has stated that Fonterra supports He Waka Eke Noa (HWEN).

HWEN proposes taxing farmers for emissions of methane which the Government and the Climate Commission both acknowledge are not causing further global warming because they are stable. Further to this, the only reason the Climate Commission has given for needing to reduce methane emissions is to offset CO2 emissions which cannot be reduced. In other word they want farmers to reduce methane emissions to subsidise CO2 emitters and they are proposing taxing farmers to force them to do so. Fonterra should not be supporting this unfairness and does not need to because New Zealand dairy farmers have a good story to tell.

New Zealand has adopted a climate target of net zero emissions by 2050 and it has also adopted a split gas approach. This means a split gas approach must be applied to what net zero emissions means. The test of whether emissions are at net zero is that in a net zero scenario any emission must be matched by a removal so that the atmospheric concentration of that greenhouse gas does not increase. With methane emissions from livestock relatively stable it means the atmospheric concentration of methane does not increase because each emission is matched by a removal of oxidizing methane. New Zealand livestock emissions are already at Net Zero and I invite you to tell that story and not promote a punitive and unfair taxing regime that denies the science of the impact of New Zealand ruminant methane emissions. 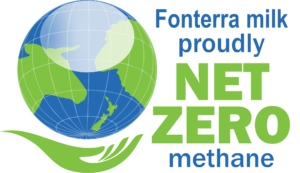