Merry Christmas from the team at FARM (Facts About Ruminant Methane)  This post went out to FARM supporters prior to Christmas. If you have not switched over to FARM yet to see what we are doing and to support us yet you can do so here https://farmemissions.co.nz/

So for those who have supported us here at PFCR and at FARM thankyou for your continued support as we continue to battle for fairness and justice for NZ farmers. Battling for politicians and industry leaders to be guided by the science should not even be needed but as you know for the last 13 years politicians and industry representatives and leaders and organisations have had to be dragged kicking and screaming to the point they have had to quite recently acknowledge methane is cyclical.

One would think having finally got them to accept the rather basic science of methane the job would be done but unfortunately it is not. They are still intent on making farmers pay for these emissions.

We are taking a break for Christmas and hope you get as good a break as you can, but it will be all on when we return.

He Waka Eke Noa (English translation “It’s a free ride” ) will be running workshops to consult with farmers about what they are proposing for taxing farmers. We have our petition which demands fairness and scientific integrity in any farm emission pricing scheme. We will need all the influence we can to get these requirements adopted because even Federated Farmers won’t support our petition. Sign it here if you have not already, https://farmemissions.co.nz/

The main thing we want is for the thing to be turned on its head so that the “Free Ride” is not a free ride for CO2 emitters with farmers being required to reduce emissions or be taxed if they don’t. We want it to become a pricing scheme whereby farmers are paid to reduce emissions. The Climate Commission is very clear that reducing methane is only required to offset CO2 emissions and that is why we believe farmers must be paid in exactly the same way a forester is paid to offset CO2 emissions.

If you would like to help us by distributing our petition at these consultation meetings please get in touch.

We have written to the new National Party Climate spokesman Scott Simpson to congratulate him on his appointment and set out our requirement that farmers are paid to reduce emissions. Scott is approachable and we have met him on a few occasions and he knows our position. It was encouraging that on a Q&A TV interview the new National Party leader Chris Luxon showed he understood the problem that methane had been incorrectly characterised by the carbon system. If only John Key had understood the basic science of methane we might have had it all fixed by now.

As well as the petition we have launched a “Net Zero Methane campaign. The He Waka Eke Noa document states that methane does not need to reduce to net zero.

This is an example of how they say they have adopted a split gas approach but have not in reality. It is also an example where the science is being ignored.

Split gas means treating each gas individually. Net Zero emissions is achieved when all emissions of each greenhouse gas are offset with removals so that the atmospheric concentration of greenhouse gas does not increase. That must be the test of whether we are at net zero or not. To say that methane emissions do not need to reduce to net zero is just scientific ignorance. When methane is stable every emission is offset and the atmospheric concentration of methane does not increase. The problem is that the legislation refers to net zero in terms of meeting some requirement based on the CO2 equivalent system, but not in terms of individual gases.  The He Waka lot need to realise that if we have a spit gas approach then net zero methane is what we have now, and if we are to have a split gas system there is no place in it for the nonsensical CO2 equivalent system.

To help get this message across we have produced the image below that you can use in any way you can to get people to understand. You can cut and paste it from this document

When we come back we will get it customised so that you can put your farm name in there so that it says Farm name, proudly Net Zero Methane

In the meantime merry Christmas from the team here at FARM. 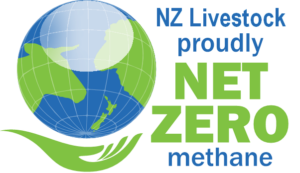